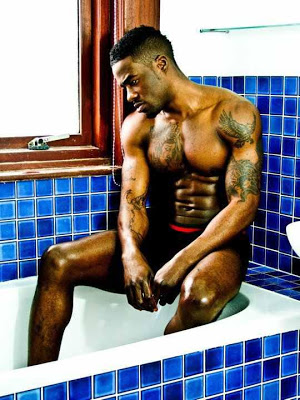 So as I promised we are familiarizing ourselves with our African models, whether upcoming ones or legends. The pace is slow agreed but I will work on it.

Now, today let’s look at the hot Adonis O’Holi. Adonis wasn’t in the industry for long before he exited the modeling world but he remains to be one of Africa’s admired models. He is now an actor and writer working on his poetry album and a clothing line.

Adonis O’Holi is from Sierra Leone but was born and raised in London. He was named one of the sexiest 100 black men in the world. When it comes to beauty pageants and the choices made sometimes we are like “uuuhhhmm what criteria were they using?” but not this one.

Adonis is sexy as ….. (Fill in with your choice of word, I don’t swear, hahaa). One thing about him is that he is not afraid to show it. He flaunts it like no one’s business which has given him the label ‘sex symbol.’ However He says he’d rather be known for his art since art is timeless.

Thing is, with him it’s not just about what he does, he is a great inspiration that when one door closes another one opens. And sometimes you don’t even have to dwell there if you find it’s not your calling.

Adonis was a football player and when all that ended following an injury, he went under depression. Modeling became an escape route for him and in the process Sean Hicky a photographer spotted him on Myspace; they did a photo shoot which built him into the brand he would later become.

And what do you know? In 2012 he won the Mister Africa International making him the first to win the crown.

He has featured in several magazines including the Cosmopolitan magazine, done jewelry shoot for Cazyan and did a shoot for Valentino.

That’s why I keep saying do what you do even when you don’t see immediate results. You never know who will be your break.

Adonis studied business at St. Dominic’s College, leisure and tourism at Harrow College and sports science at Wealdstone Football College, all in London.

He describes his style and fashion as comfortable, grown up, and sexy. Not loud and not keen on following trends.

On why he quit modeling?

I really do not like the way models are treated like moving mannequins. However, modelling is some people’s dream and if it makes them happy, then that’s perfect for them.

Speaking to fashion police London he had this word of advice;

To anyone who has found themselves within dark times, to anyone who finds themselves in unfortunate circumstances, the dark may seem to go on forever, but it is only for a moment, if you hold on, stay strong and believe, then you will triumph, you will grow and one day soon you will fly higher than you knew the skies to lie… trust me. 🙂

What happened to his ‘always beautiful, broken wings can still fly’ design which was to be released? Lemme go find out meanwhile feast your eyes!