African fashion is indeed misrepresented. Romanticized? not sure about that, but Kenya and South Africa have just as much to offer as other African countries if not more.

An extract from a piece written for SCHICK Magazine Issue 2. by the the dcktator

For those who actually know the true state of any of the various fashion industries across Africa, seeing western representation is unsettling and somewhat infuriating.  The world has become much smaller, and technology has made it such that there is instant access to information from anywhere, and has evolved way past the days of Mean Girls and Coming to America where extrapolations were used for comic value. Needless to say, it was shocking to hear an exaggerated and undefined ‘African’ accent in an American high school setting in 2017- yes Spiderman Homecoming, you tried it.

With that being said, I struggle to find the comic value in Stella McCartney decorating her ‘African inspired’ look book with bamboo houses and swarthy, famished looking models posed in Lagos- one of the nicest areas in Nigeria.

Representations are heavily dependent on out-dated and unrealistic aesthetics, which makes for good storytelling, however, are grossly inaccurate.

Africa IS the world’s second largest most populous continent, made up of 54 countries and home to 1.2 billion people. Africa IS NOT one big country where white people go on their gap year to feed orphaned elephants. There are parts of Africa, which offer that option, such as Kenya, South Africa etc, however other parts of Africa are a lot more than that desperately boring rhetoric.

In the last decade, there has been an explosive increase in global attention on Africa and our fashion. This means that now more than ever, the continent’s fashion designers, fashion weeks, photographers, magazines and bloggers are getting the attention of publications and their readers from across the globe. Nigeria’s annual Fashion and Design week gains attention from fashion media powerhouses such as Vogue and Elle, the prestigious Business of Fashion 500 list features 11 Africans amongst esteemed influencers of the industry such as Anna Wintour.

The current Editor-In-Chief of British Vogue is a Ghanaian national; Edward Enninful.

Fortunately, this is a plus for diversity and recognition for the various industries within the continent. Attention from global power houses brings about an unprecedented amount of exposure for those in the forefront, which is great as it creates a niche, allows for more creative expression for the people and boosts confidence levels in the industry.

One would assume this as success and forward motion for the continent- which in many ways it is; however there seems to be a major setback which at this point is proving difficult to reverse. Let’s not even get started on the issue of appropriation- yeah, Louis Vuitton-Must-Go, as did Junya Wantanabe’s SS/15 runway show, and the lack of appropriate models.

The inexcusable downfall is that there is very rarely any representation, which accurately reports depictions of what really is. On one hand, African fashion is romanticized. Everybody wants to ‘take it back to the roots’, and only ever represent the motherland in it’s ‘true form’. I have a few questions; Is Rome the same as it was in the 5th Century? Don’t you know anything about modernisation?

On the other hand, they seem to be doing a huge favour by including Africa in the narrative, because how else will the world know about the ‘nations’ talent if the higher ups from the Western world didn’t come down from the golden paved streets of 5th Avenue, the great beyond to check it out? 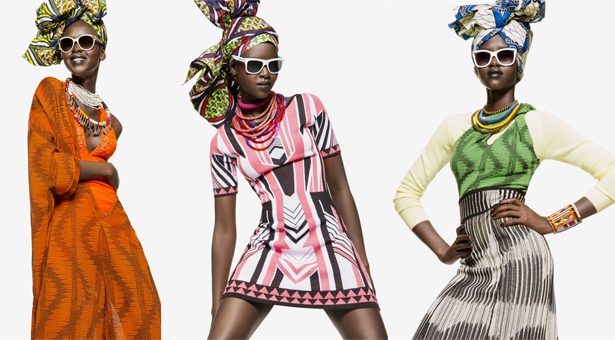 We have innovative creatives in every possible category and they come from all over the continent and not just the top three in the forefront. Yes Maki Oh and Lisa Folawiyo are amazing, but who is talking about (I can’t lie sha even me I don’t know but you get what I mean). By repeatedly only reporting on the same handful of brands, companies or individuals from a couple of select countries, international publications miss out on so much of the bigger picture of what fashion in Africa truly is and therefore continue to misrepresent the continent’s fashion industries.

In order for foreign publications and brands to represent African fashion accurately, they will do well to work with journalists, photographers, designers etc. who actually live and work in Africa, instead of someone who decided to loiter around for a few months for research, or is ‘originally from here’ but grew up in Brixton.

If authentic African professionals are featured and collaborated with, the success level will be boosted beyond what already is, and acknowledgments will hold more meaning.

Africa cannot, should not and will not continue to allow the constant misrepresentation.

Anyone who is choosing to report on any aspect of a fashion industry within Africa needs to make it his or her business to do it right, or not at all. If you don’t agree, think about when the last time you saw a Vogue editorial that wasn’t themed as such where anyone is wearing a civil war dress.

For more, buy the digital version at iamschick.com/buy