The mention of Sarah Baartman known as the Hottentot Venus, may bring sad memories, but there is no denying how much influence she had and continues to have on women two centuries and counting. 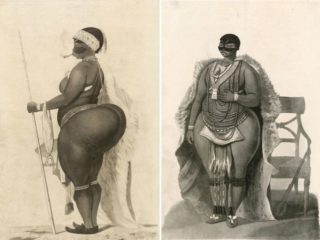 If you have traveled temporarily away from home, either city or country, you know how it feels like. The fear and excitement of experiencing a new locality, the hopes, the expectations; Somewhere along that path as you go further from home, you will reminisce on life back home, and your imagination will take you to few weeks, months or years ahead when you have done well for yourself, and back home to share your accomplishments.

More often it doesn’t work like that, and we come back disappointed or heart broken, but at least many of us get the chance to come back.

Sarah Baartman did not get that opportunity, she did not get the chance to go back home and share her pains, her joys, her disappointments, her experience. When Sarah was on that voyage, watching as her home in South Africa disappear with every distance, she might not have thought that she would not be home again, that humiliation  awaited her, Sarah did not know that her life would be subject of so many discussions and platforms so many years down the line.

“I’ve come to take you home –
home, remember the veld?
the lush green grass beneath the big oak trees
the air is cool there and the sun does not burn.
I have made your bed at the foot of the hill,
your blankets are covered in buchu and mint,
the proteas stand in yellow and white
and the water in the stream chuckle sing-songs
as it hobbles along over little stones…”

Big ass and thick body shape was considered highly attractive and desirable among the khoikhoi. It was a treasure to care for. They would rub special oil all over their bodies to maintain the beauty.

Sarah Baartman got Women coveting her shape so much they started to wear corsets and a good amount layers of clothes to boost their embakasi (Ugandan word for ass). It is reported that many white women died from having their ribs crushed and internal organs displaced due to the overly constricting corsets.

Today there are but enhancer undergarments, booty pop jeans, but lifter panties and it goes on.

The ass era is back!. Women getting injections, pills and plastic surgery to get a boost of the steatopygia, and we can’t ignore the twerking; Reclaiming Sarah Baartman physically.

Then came Paper Magazine In November 2014, with the cover of  Kim Kardashian in which she was illustrated as balancing a champagne glass on her extended rear. This was depicted as the visual representation of Baartman and how she was represented as the “Hottentot Venus” during the 19th century.

Sarah Baartman may still have influence on women today in regards to steatopygia which is fine, but the difference is that today; women undress willingly, twerk and take shots of their “big” embakasis for the world to see. Today, no one will sue anybody with the claim that our women are being coerced to parade themselves naked in music videos, because we willingly take our clothes off.

During 1814–70, there were at least seven scientific descriptions of the bodies of women of color done in comparative anatomy.

1800s, people in London were able to pay two shillings apiece to gaze upon Baartman’s body in wonder. For extra pay, one could even poke her with a stick or finger.